Machame Route begins from the south-western side of the mountain; the trail passes through some of the mountains finest features, including the cloud forest of Kilimanjaro's southern plains, the dry and dusty Shira Plateau and the delightful groundsel-clad Barranco Campsite. Furthermore, you have a choice of ascent routes to the summit, with the thrill-seekers opting for the daunting Western Breach route to the summit, while majority head for the lengthy, long winded climb up the Barafu trail, with the Rebmann glacier edging into your field of vision on your left as dawn breaks behind Mawenzi on your right.

Furthermore, unlike Marangu Route, on Machame Route you don't use the same path to descend as you took to climb up the mountain but instead you come down via the Mweka route, a steep but very pretty descent encompassing inhospitably dry mountain desert and lush lowland forest in a matter of a few hours. For the best hike it takes a minimum of six days and extending one extra day is worthwhile to allow acclimatization above 4000m before proceeding on to the base camp at 4600m then to the summit.

Doing it for 7 days 6 nights is more comfortable as it is not very exhausting as the extra night during the ascent is usually spent at Karanga Camp, half way between Barranco and Barafu Camps. Not only does the extra day aid acclimatization, but this also reduces from almost six to three the number of hours walked on the day that precedes the exhausting midnight ascent to the summit, thereby allowing trekkers more time to recover their faculties, relax and prepare themselves for the final push to the top. 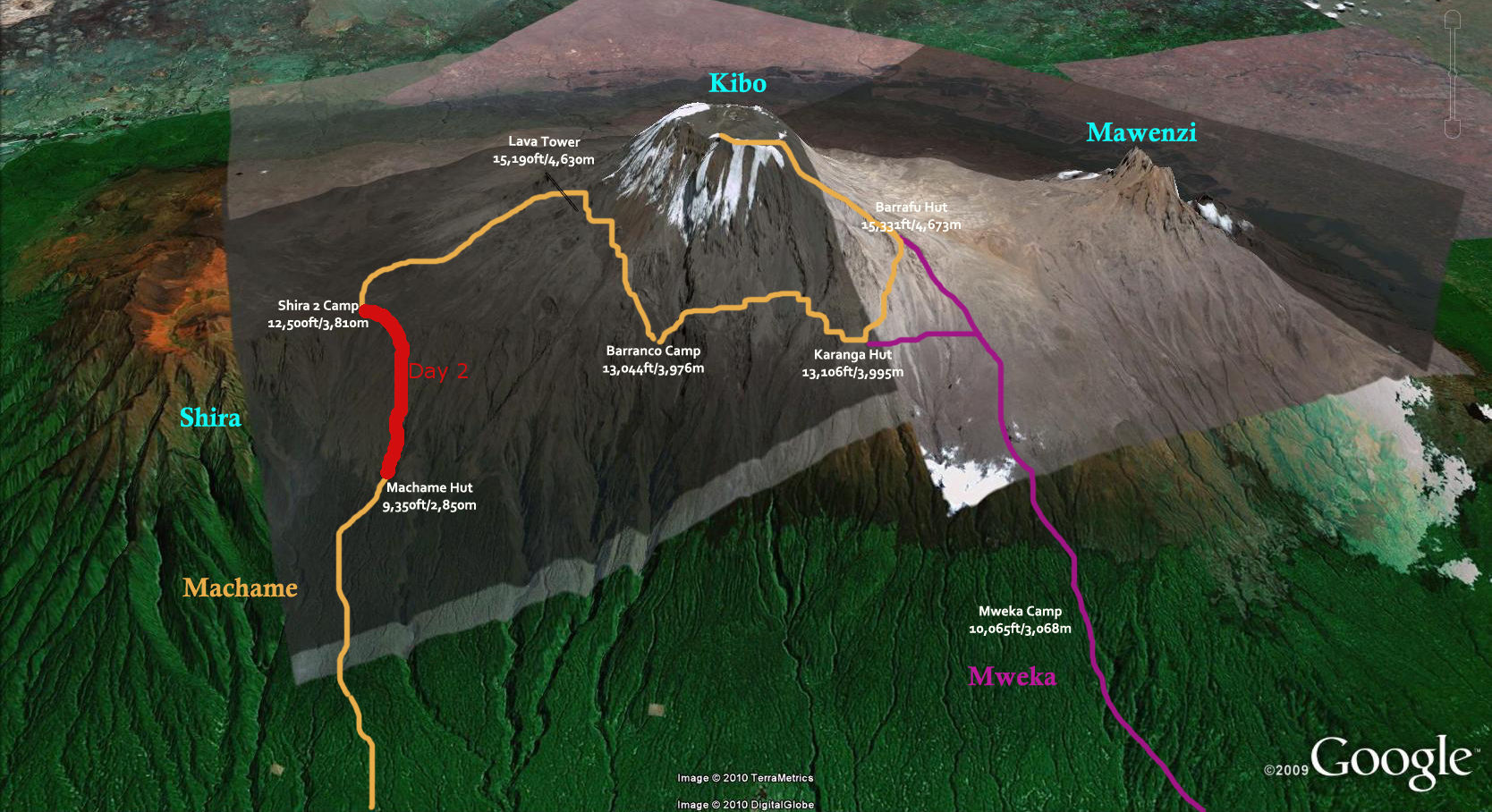 Drive from the hotel in Moshi town after breakfast to Machame Gate - (1800m) for reservations and start climbing through the rain forest up to Machame Camp - (3000m). It takes 5-6hrs with picnic lunch on the way. Dinner and Overnight at Machame Camp (3000m). Distance covered is 10.75km and altitude gained is 1200m.

After breakfast continue on hiking through the heath and moorland to Shira 2 Camp - (3850m) with Picnic Lunch on the way for 4-5hrs. Dinner and overnight at the campsite. Distance covered is 5.3km and altitude gained is 850m. 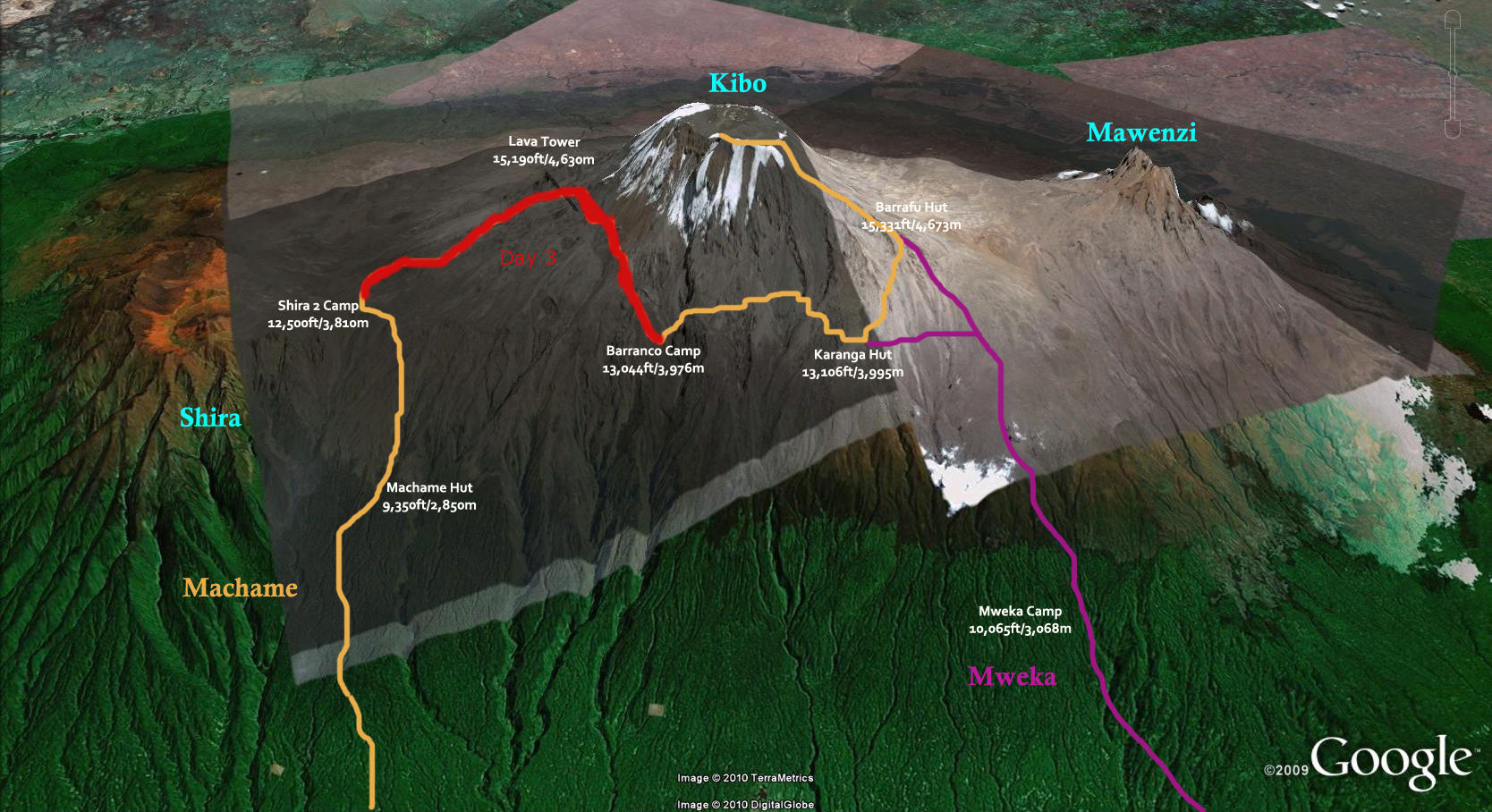 Early in the morning after breakfast start hiking to Barranco Camp - (3940m) through Lava Tower - (4600m) for acclimatizing. It takes 6 -7hrs with picnic lunch, Dinner and overnight Barranco Camp (3940m). Distance covered is 10.75km via Lava Tower and altitude gained is 750m then from Lava Tower to Barranco altitude lost is 660m.

After breakfast start climbing Barranco walls- (4250m) to Karanga Camp - (4000m). Have hot lunch, rest and walk around for acclimatizing. It takes 3-4hrs. Dinner and overnight at the camp. Distance covered is 4.25km and altitude gained is 60m. 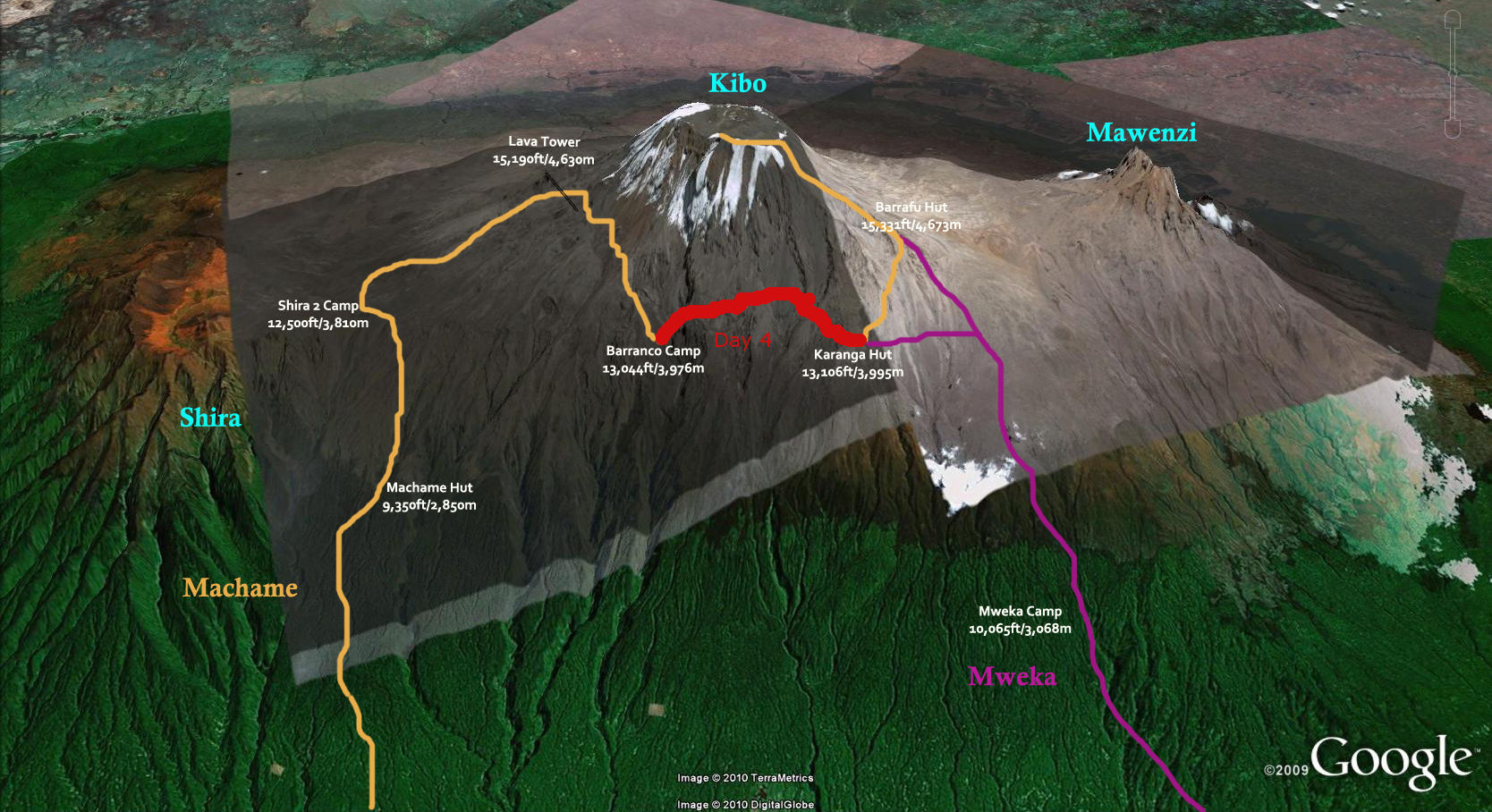 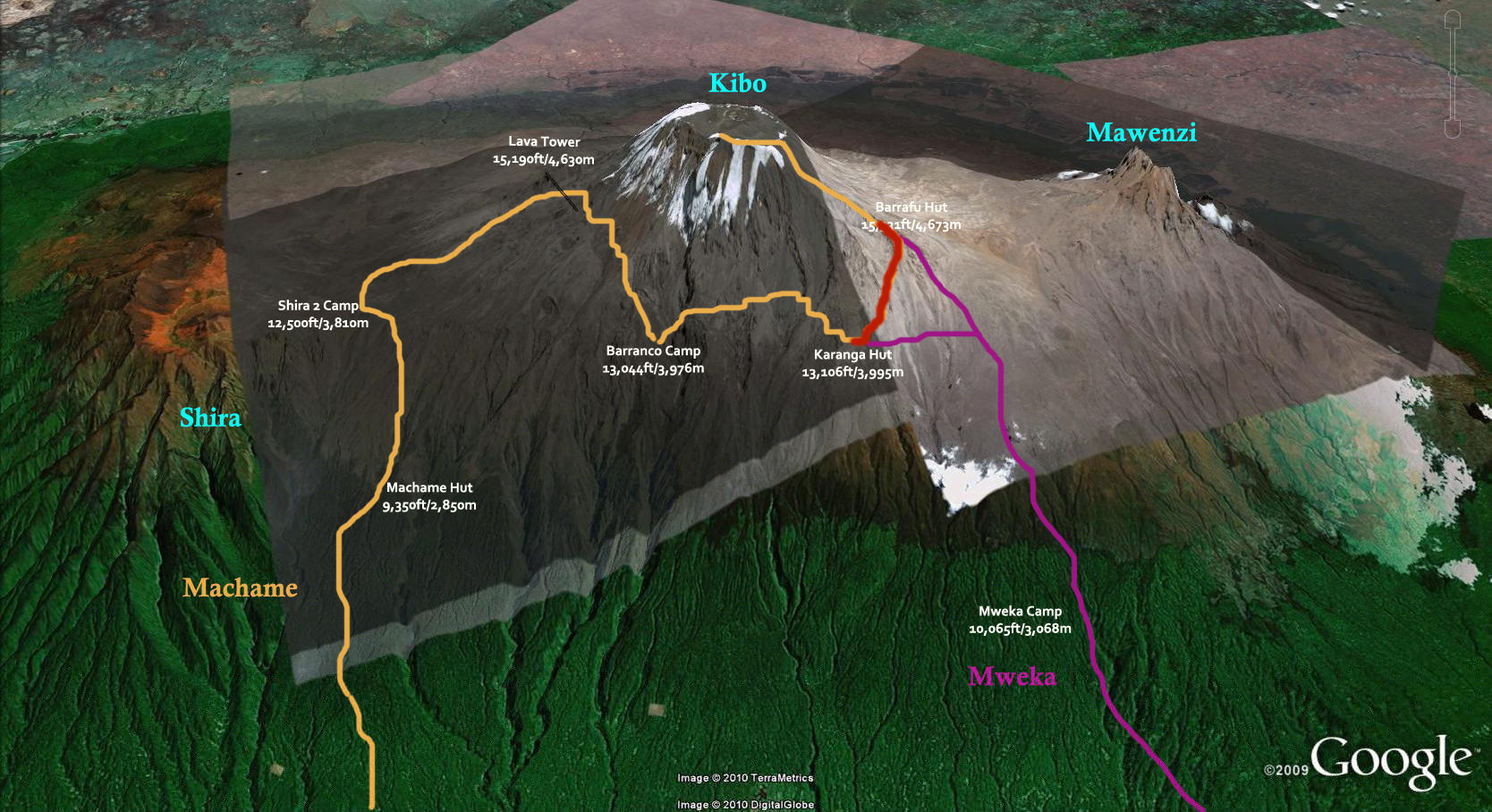 It takes about 3hrs from summit to Barafu Camp for breakfast and rest for few hours, eat hot lunch and then continue descending from the alpine desert, heath and moorland to the edge of the rain forest at Mweka Camp - (3100m). Distance covered from Uhuru Peak to Barafu Camp and to Mweka Camp is 11.5km and altitude lost is 2795m. 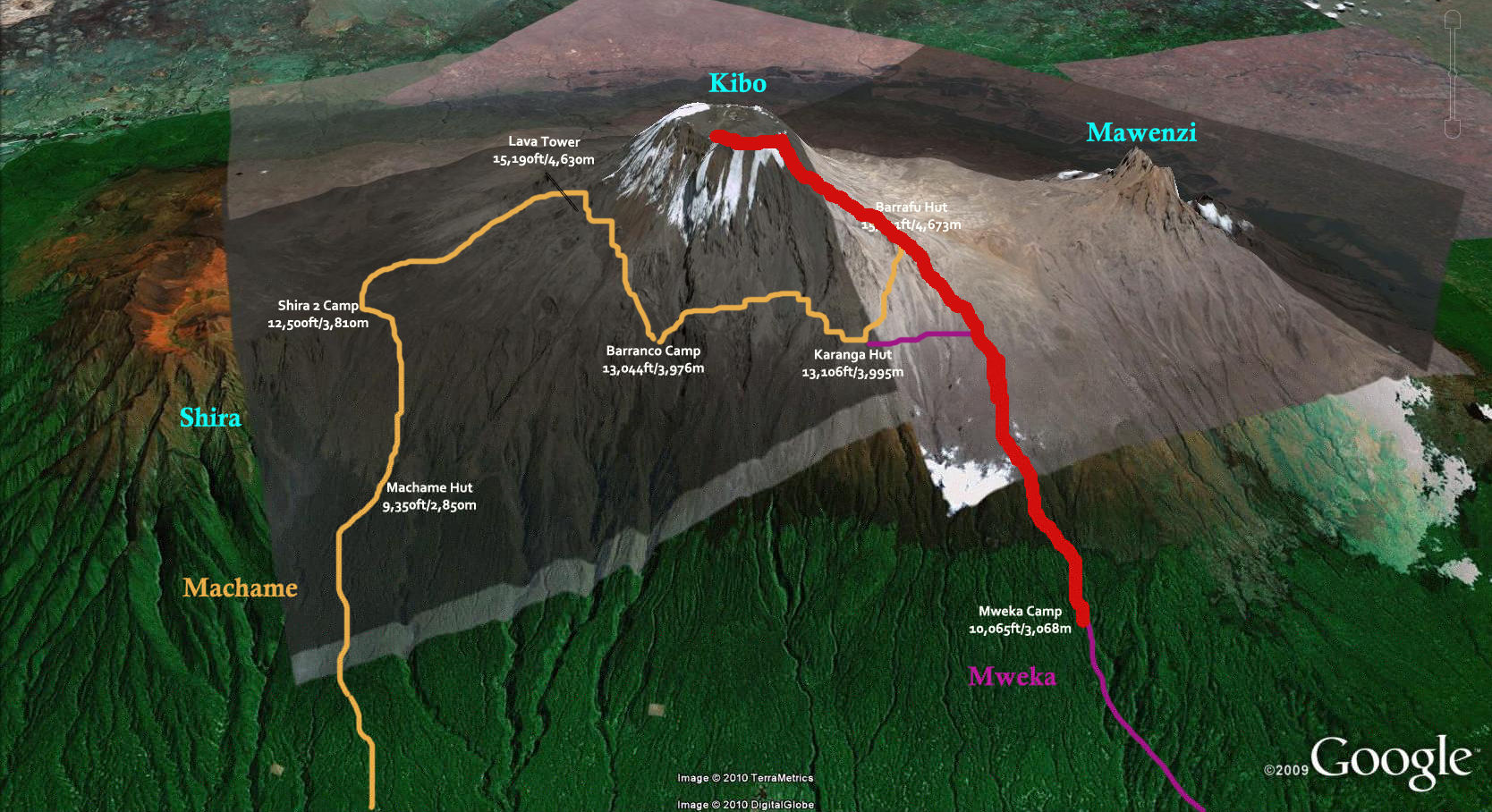 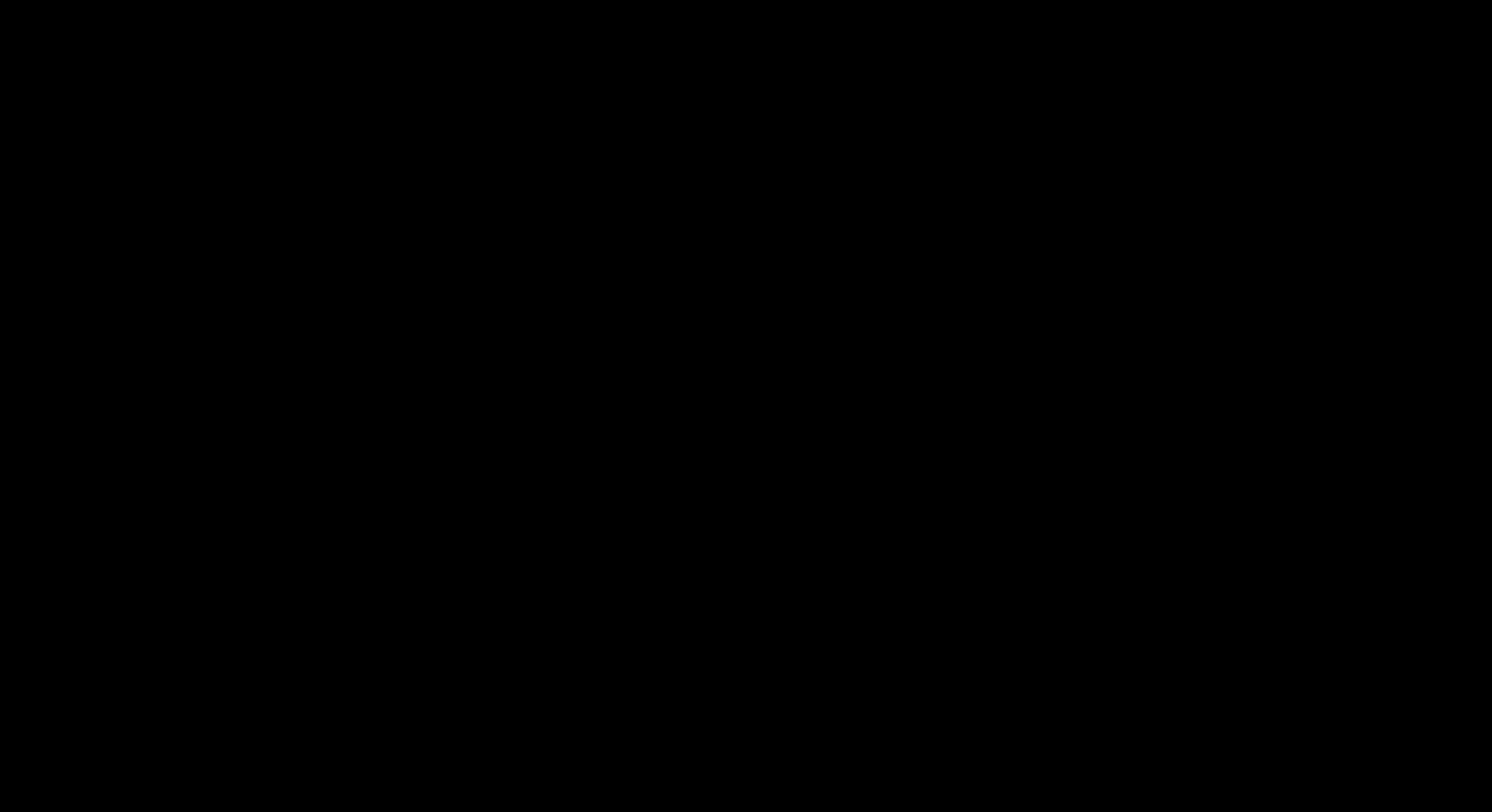 Walk after breakfast to Mweka Gate (1800m) through the rain Forest for 3-4hrs distance covered is 9.1km and altitude lost is 1400m. Receive your award certificate if you will have made it to the top and meet the waiting vehicle and transfer to the Hotel Moshi for hot shower, lunch and rest. End of climb.